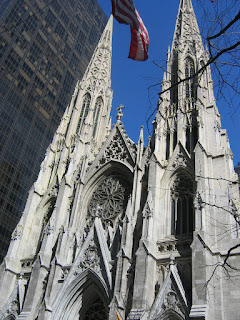 Photo of the front of St. Patrick's Cathedral, NYC courtesy of Wikimedia/Rotatebot

St Patrick's Cathedral in New York City will be the site of the funeral of a truly remarkable paralyzed man -- NYPD Detective Steven McDonald.  If ever a man was entitled to be angry and bitter, it was McDonald, his wife Patti and their son Conor.  If ever there was a PWD [person with a disability] worthy of being called an inspiration, it was Steven McDonald. Thirty years after being shot down and paralyzed in the line of duty. McDonald died of a heart attack earlier this week.

Steven McDonald left his home in Malverne, Long Island on July 12, 1986 and said goodbye to his wife Patti.  They were married less than a year, and Patti was pregnant with their first [and only] child.  Although every cop's spouse knows there is a possibility the officer might return home injured or not at all, I'm sure Steven and Patti expected to settle in their home in Malverne with the stereotypical large Irish-Catholic family.

That morning, Steven McDonald questioned a 15-year-old in Central Park about a string of bicycle thefts and noticed something in the teenager's hand, wrapped in a sock.  In an instant, a gun emerged from the sock and the teenager put three bullets in the cop's body -- one in his head, one in his throat, and one in his spine.  Those three bullets rendered Steven McDonald a quadriplegic that day and ventilalator-dependent.

Steven McDonald, Patti McDonald, and their soon-to-be-born Conor McDonald had every reason to live a life filled with anger and hate.  Three bullets from a 15-year-old made Patti into a full-time caregiver, Conor into a child whose bond with his father would be different from almost every other kid his age.  And three bullets made Steven a quadriplegic [paralyzed from the neck down] who would never be able to play ball with his son, teach him how to drive, or anything else that dads typically do with their sons.

But, rather than live a life of anger, revenge or bitterness, Steven McDonald forgave the kid who changed his life.  He turned tragedy into triumph, by traveling the city, country and even the world to teach everyone how to live with forgiveness and peace.  He would dream of one day traveling with the teenager who shot him, to spread the message McDonald had already conveyed at the Vatican, and in Israel, South Africa and Northern Ireland.  Sadly, this would never happen; shortly after being released from his ten-year prison sentence [for attempted murder of McDonald], the teenager -- then a 25-year-old-man after release] died in a motorcycle accident.

Just as Steven McDonald followed tradition and joined the NYPD after his father and grandfather,  Conor has also become an officer with the NYPD, making four generations of McDonalds in blue.  In his speech at his father's funeral at St. Patrick's Cathedral today, Conor didn't dwell on what he missed by having a wheelchair-bound and paralyzed dad ho depended on a ventilator to breathe for him.  Conor reflected on the good times with a remarkable dad who shared their appreciation courtside at hockey games rooting for the New York Rangers.  When people call me "brave" for dealing with my disease, I tell them that bravery is going into a dangerous situation and not knowing whether you're coming out alive. Steven McDonald was brave.  And he probably flinched at being called an inspiration, but he inspired so many, including me.