First of all, check this out.  Some guy mentioned me in his blog and then posted the coolest pics of some of the architecture in my neighborhood.   Some guy by the name of Alan Rosenberg who came to visit me in 2009 loved my neighborhood and some of the remnants of pre-WWII architecture and wrote about it, in his blog [link above or click http://alanrosenberg.blogspot.com/2009/01/rego-park-ny.html ]

Okay, so my last update talked about the losses of a dear aunt and a dear friend -- My Aunt Vicky and fellow ALS warrior Norma Steck-Hess.  But that's not all.  The same day [January 2, 2015] that my Aunt Vicky passed away,  the husband of my therapist also passed away.  Dr. L had been taking a hiatus since her husband went into the hospital for surgery, and then for a few weeks while he was "recovering".  Then she reported to me that he was "deteriorating" and she would need more time off.  It wasn't until mid-January that she emailed me and gave me the sad news that her husband had died.  She then said that she would probably return to her practice in early February.  She ended up further delaying her return to February 23, because she was not ready and wouldn't be able to "be present" for her patients.  As it turns out, I probably would have had to cancel a few sessions due to the weather, which has been "dangerously cold" according to the TV meteorologists.  My apartment was so cold, that we have been wearing hats and layers of clothing INSIDE. 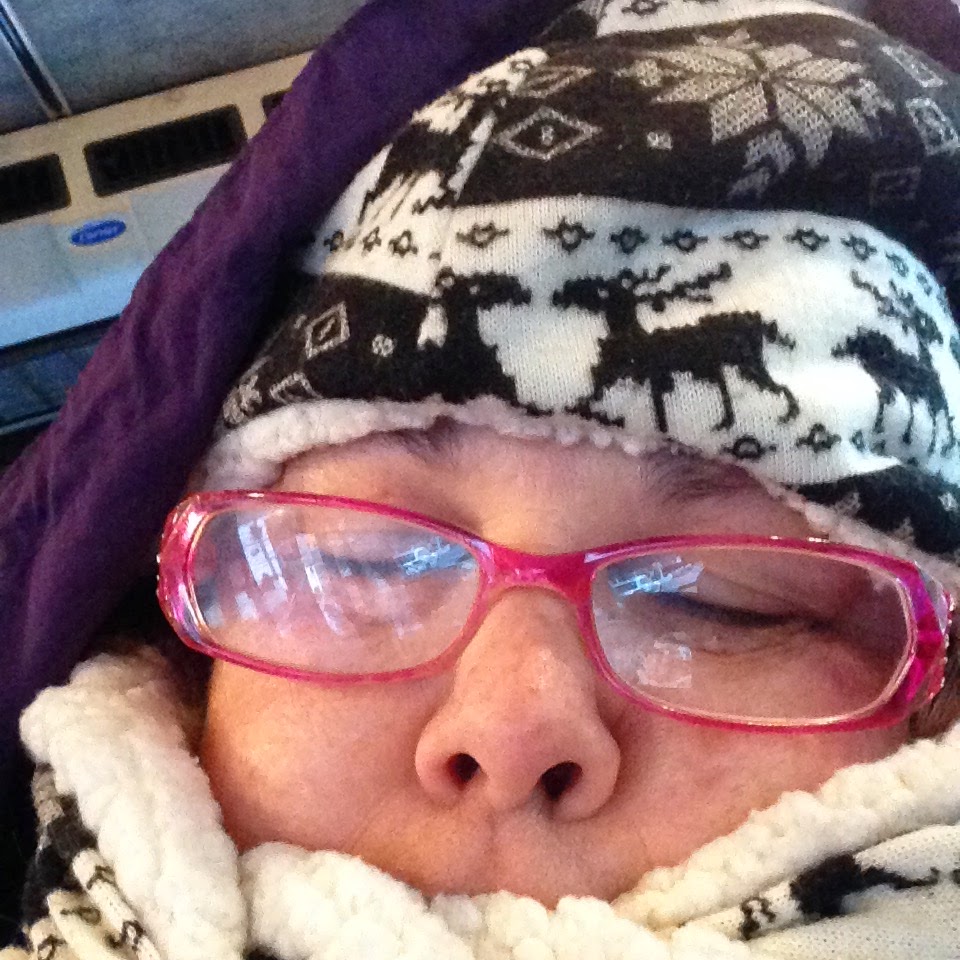 Okay, so this selfie was taken outside, which wssn't much colder than inside.  I was wearing my pink-framed reading glasses and my sherpa hat that ties under my chin.  And forgot to camouflage my freckled sun-damaged complexion.  This why I don't post pics of myself and don't take many selfies at all -- for various reasons, ALS has made me very un-attractive.

Then later in February,  I heard of the death of another aunt, my Mom's younger [and last remaining] sister in California.  My aunt Sylvia was the one my Aunt Vicky went to live with, when her own husband died.  My aunt Sylvia was 82 and she and I were not close when I was a child.  When I became an adult, Sylvia and I became closer and I found her to be a faithful confidante.  I know she loved me very much, and that is why she could not deal with my illness.  She called me on the phone in the early stages of my disease and could not understand what I was saying.  The shock was too much for her, I guess, because I never heard from her again.  I thought about her many times and considered writing her a letter because she wasn't techno-savvy and didn't have a computer and email.  But laziness and weakness got the best of me and I never did.  It always hurts when people from my past,  freak out from my ALS and completely abandon all contact with me because they just can't handle it.  I have learned to deal with more and more solitude as the years go on. 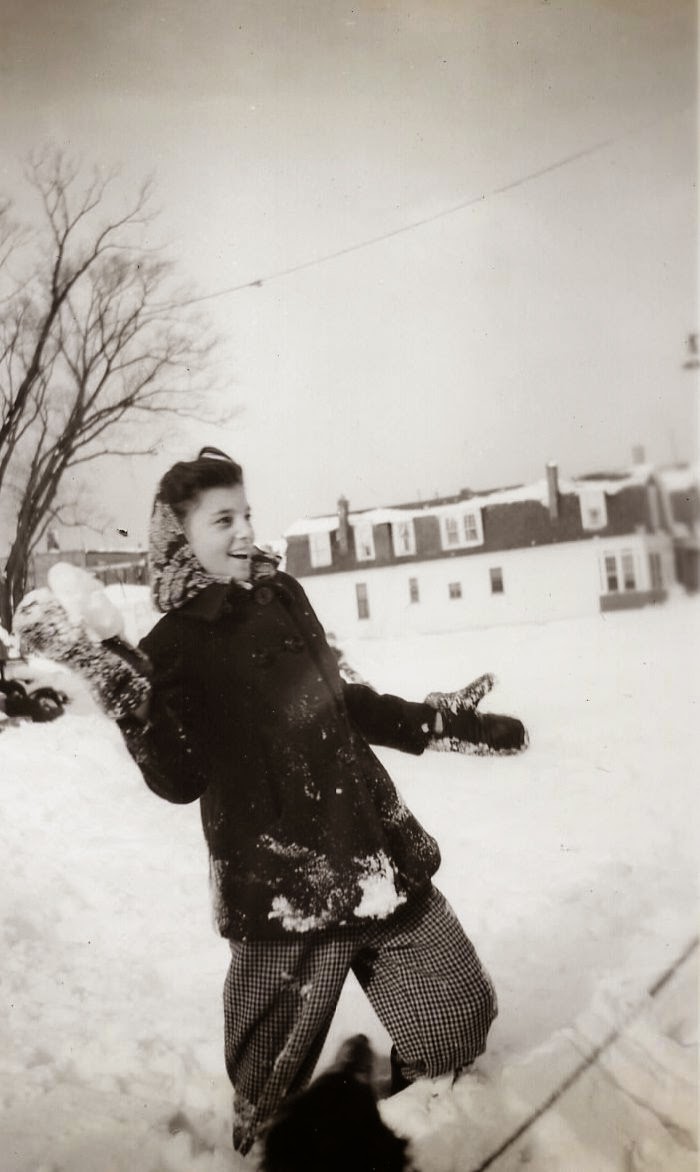 Here is a picture of my Aunt Sylvia when she was young.  The Vogel girls -- my mom Ruth, and her sisters -- Lynn, Vicky and Sylvia -- were all very beautiful.


But the bad karma doesn't end there.  Bad things seemed to be happening all over my "universe". My 87-year-old Dad was fainting and weak.  He went to the hospital and now is in a rehab facility -- aka extended care.  He hates being there and wants to go home, but he cannot live alone anymore and has to have round-the-clock home care.  He's not too happy about that either.  I can relate because I hated to have my privacy and space invaded by strangers too.  But I have a studio apartment and he has a house.  So he is in better shape than I am because he has a lot more space for another person.  Still, I totally understand.  It's a whole change in lifestyle for him and a new era.  My sister Haley has had to handle the logistics for him via an attorney, but I luckily served as a model as one who has been through the "spenddown" through a pooled-income trust in order to get home care.  Once that is all in place, things will feel a lot better, but it's a waiting game I am all too familiar with. All in all, it's an unfortunate situation that Haley has to handle it all herself.  This is not what we signed up for -- all children [in our case -- both sisters] should be able to share the duty of taking care of an elderly parent.  They call it the "sandwich generation"  but this sandwich is open-faced because I am a slice of the bread that is busy with the full-time job of taking care of myself.  Or is it the other way -- are the children the "bread"around the sandwich or are we the "meat"?

More still:  My friend Danielle lost her bunny Marley and about a month later, Marley's partner Phoebe.  This happens a lot with bunny rabbits; one half of a bonded pair passes away and soon after, the partner goes too.  The same thing happened with Nickels and Angel -- the bonded pair of my friend Deb several years ago.  Bunnies can die of broken hearts.  Another furry friend also passed away this winter -- Abbey  aka Cissy, the 18-year-old cat companion of my friend Louise.  I can't remember ever entering Louise's apartment without Abbey greeting me.  And the human world wasn't spared either -- besides my two aunts and my friend Norma, my friend Deb lost her two grandparents within weeks of each other.  I began to advise people not to come around me, because I was sure I was bad luck.  Danielle then came down with pneumonia last month...whew. 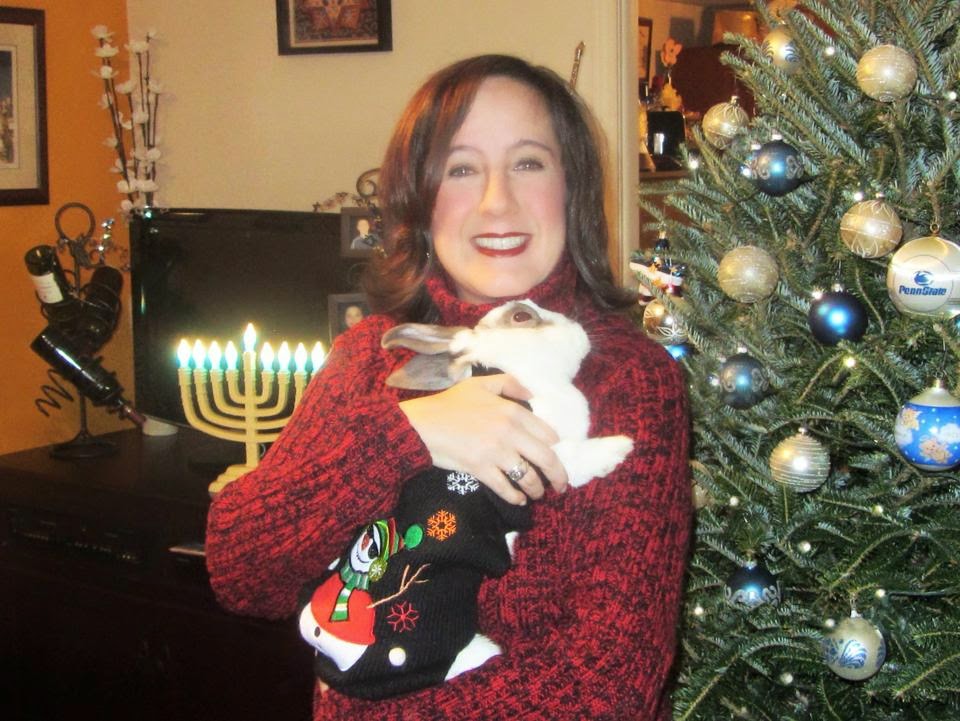 Here is my friend Danielle holding her bunny Phoebe.  They had just lost Phoebe's partner Marley, and Danielle was planning on finding another hus-bun for Phoebe, but then Phoebe passed soon after this picture was taken.  Danielle is bi-cultural like my nieces and nephew -- Jewish mom and Italian Dad.....thus the menorah and Christmas tree [just like at my sister's house]
And the cold!!  This was an especially bad winter, but the heat in my building never worked right all winter.  Now that spring is coming, the heater has been repaired, but we went through torture, often wearing hats and gloves in the apartment.  My building superintendent was fired by my board rather suddenly last month.  Since he is refusing t I spent about two months not going outside; Queens -- ever the forgotten borough -- was a sheet of ice and not good for navigating wheelchairs. AND, with the temperatures at record lows, I risked killing my brand-new wheelchair batteries. So now I am left with pent-up needs for medical and diagnostic appointments.  I guess I know what I will be doing in the coming months -- Access-a-Ride here I come!!

As winter comes to an end, Spring is starting to look much much better. Surinder -- my aide from India who is really into astrology -- says that I am moving out of this crappy karma in April.  Let's hope she is right
Posted by Fern Ellen Cohen at 8:53 PM No comments: