So it's coming in on the home stretch of the three months of recuperation from my tibia fracture. I enter to my two month follow up at the orthopedist and he removed the shorter cast? Which went below the knee. This was an improvement on the first cast, which went well above the knee so imagine my delight when they cut off the second cast and gave me a boot thing aka soft cast -- and told mr I could stand using this new improvement. I couldn't wait to get home and do all the things that the ability to stand, allowed me to do.

That happiness was short-lived, however. I tried to stand and the leg with the broken tibia produced the most blood-curdling yelp when I tried. Something was going on with the bottom of my foot and it wasn't good. Was it something wrong with the bottom of the boot? I had no idea. Not to mention that the good leg wasn't perfect either. You see, after two months of lying in bed, my muscles had atrophied and needed building up again. I realized how important it is for me to have physical therapy. Suddenly, my aide looked at the bottom of my foot and saw a huge cyst-like blister.  Oh hell, I thought. Great!! I happened to have an appointment with my internist a few days later and she looked at it and said it seemed infected nd gave me a one-week round of Amoxicillin.  She doesn't like to give antibiotics recklessly and for that I love her.  So I loaded up on probiotic capsules and drank kombucha to compensate.  And I made an appointment with Aadvanced Foot Care, who had solved my plantar fascitis many years ago.  The podiatrist determined I didn't have an infection, but a pus-filled blister.  He lanced it and told me to put bacitracin on it and see him in a week.  It improved but still hurt.  I went yesterday again and he said I could try putting my weight on it.  So when I came home and had to use the commode, I decided to try.  My aide had trepidation, but I did it!! It wasn't great and my leg muscles have atrophied somewhat with three months of bed-rest.  I have a prescription for physical therapy to help me build the muscle, and I also found a website with exercises for a post-fractured tibia.  I have to decide if I want to go outside for PT or have home PT.  I have had both and each has its pros and cons.

Then there is my wheelchair cushion.  When you're sitting in a wheelchair upwards of 16 hours a day, a comfortable seat is very important.  An uncomfortable cushion is painful and can cause skin breakdown and pressure sores [the bane of all people with disabilities].  I recently got a Roho cushion, which has waffle-like compartments filled with air.  It has to be regularly inflated to ensure enough comfort.  Well, one morning, we found the valve on the floor; it had come off the cushion.  A Roho cushion that cannot be inflated is useless.  In almost no time at all, my cushion deflated and of course the wheelchair vendor technician came to my apartment and confirmed that the cushion was not fixable.  So I am in the waiting period for the insurance process; this means it could be several weeks before I get a new Roho cushion.  I thought about buying a standby extra cushion -- $350.00 -- I don't think so.  The ALS Association will come to my rescue some time tomorrow with a loaner cushion.  Their loan closet has saved me many many times.  One thing I have learned to get used to is a waiting period for any wheelchair repairs or components often exceeding six weeks.  A real pain!!  Since it's painful to sit in the wheelchair with a deflated cushion, I would still find myself stuck in bed.  Instead,  I have learned from these three months that it's beneficial for me to have a couple of hours of "bed time" each day for the post-thrombotic period [after deep-vein thrombosis, or DVT].  Below is a picture of a Roho cushion.  You can see the "waffle" air compartments.  It's considered the "Rolls Royce" of cushions and is not just for wheelchairs; it can help anyone who can benefit from better weight distribution and to prevent pressure sores.  It is great for old folks who might not have a lot of butt padding and compromised back muscles. 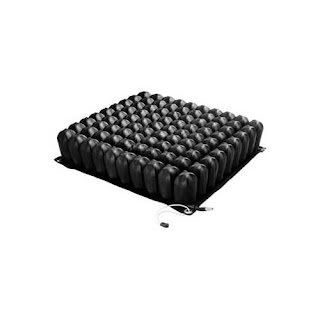