Walk to Defeat ALS in Manhattan and Ride for Life 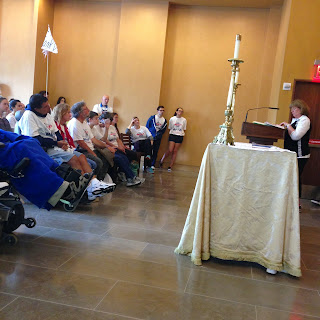 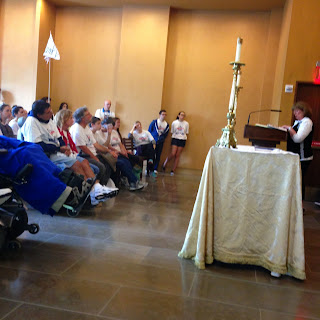 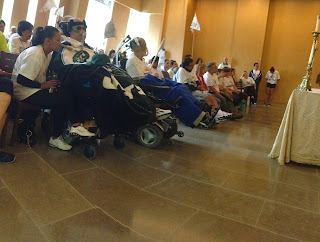 These photos above are of the 2015 Ride for Life, now in its 18th year.  The gentleman seated smack in the middle with the gray beard, is Christopher Pendergast who has survived with ALS for more than 20 years, started the Ride with a team of guys with ALS who rode their wheelchairs to Washington DC from Long Island.  Nowadays, they ride from Montauk all the way to Manhattan.  In the last couple of days, they pass through Yankee Stadium, home of Lou Gehrig, as well as Lou Gehrig's real home in East Harlem.  On the last day, they go over the Brooklyn Bridge, accompanied by a group of bagpipers.  The pictures above are of the closing ceremony which I attended with Louise Foisy and Lynette Wahid.  In past years, I rode from washington Square Park to Columbia University, a leg that the Ride decided to cut out this year to shorten the last day.  For 12 days, ALS patients ride their wheelchairs with walkers alongside them.  Some ride the whole 12 days, and some for a day or two.  But along the way, they are met by many organizations and schools full of children and teens who have raised millions of dollars.  The money goes to grants for respite care and equipment for patients, and to research.  For more information, go to http://www.rideforlife.org.  Christopher is married to Christine [yes, Chris and Chris] and she has been right by his side for several decades, as well as their son and daughter.  They have been a very active family for the cause.  Before ALS, Christoper was a science teacher in Northport, Long Island. 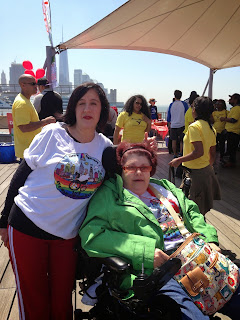 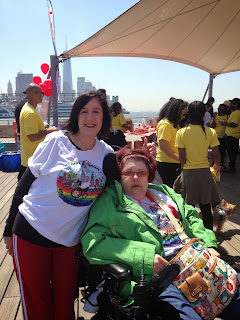 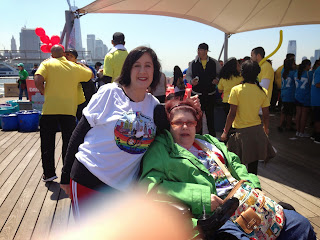 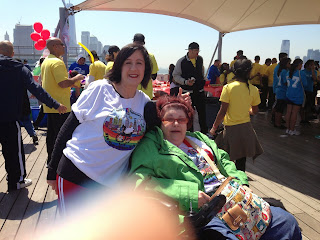 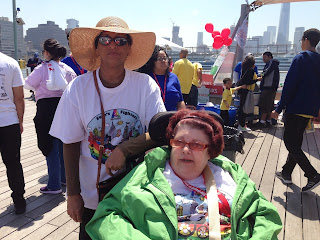 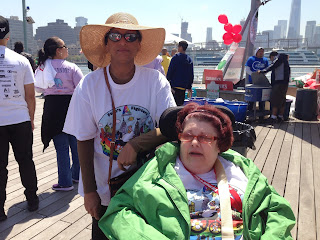 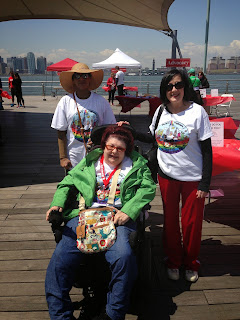 These pics above are of the 2015 Walk to Defeat ALS in Manhattan.  My team was small this year -- Lynette Wahid and Danielle Aquaviva, but we will be collecting donations through October.  My team -- Fern's Fighters -- will also walk in the Walk to Defeat ALS in Eisenhower Park on Long Island on September 19 this fall.  Once again, Danielle designed some cool tee-shirts. They did something different for the Manhattan Walk to Defeat this year.  Formerly, the walk started around the West Village -- like Charles Street -- and ended at West 55th Street.  This was a nightmare for people who came in cars, which they parked at the starting point and then had to get themselves from 55th all the way down to a spot about three miles away where they began.  This year, we started at about Houston Street and ended in the same spot.  Of course, you can't please everyone; there were complaints that the point where we turned around to come back was confusing.  And the pier [45] where the walk started had nowhere for Access-a-Ride to pull in.  So he dropped us at Pier 40 and Danielle called them to change the pickup point for the return to Pier 40.  I should also mention that they served the best ARTISINAL pizza at the end of the Walk.  I honestly don't know why more people don't join us for the Manhattan Walk.  In many ways, I prefer it to the Long Island Walk, especially since I can use Access-a-Ride and take my motorized wheelchair.

Fern's Fighters are registered for the Manhattan Walk and for the Long Island walk to Defeat, which will be on Saturday, September 19.  I would like more people to join us at Eisenhower Park in September, but if you just want to make a donation, go to this link   The new tee-shirt design, by none other than our team designer Danielle "Nellie" Aquaviva -- will be displayed soon.
Posted by Fern Ellen Cohen at 9:01 AM