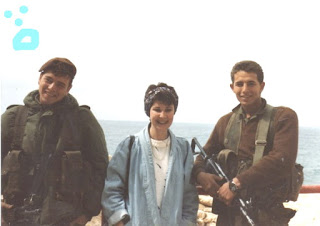 I had discovered that one of the medications that I was taking for hypertension [high blood pressure] called "Azor" was in the category of "calcium channel blockers" and have as the number one side-effect: edema. My swelling, especially around my ankles, has been a bone of contention for me. So on my last clinic visit, I spoke to Dr. Wu, my neurologist, and brought this to her attention. She called my primary doctor and discussed a changeout of the medication. I went to my primary doc last week for my quarterly followup and she told me to stop the Azor and let it go out of my system for about a week before starting the Benicar HCT. I immediately started seeing an improvement in my foot swelling. Now I have begun the Benicar HCT, which contains a diuretic, so it should get even better. While I was at the primary doctor, I got the seasonal flu vaccine, and that night I hardly slept because I felt feverish -- an obvious side effect. Thankfully, it went away the next day.

I think I will be able to manage the cost of the new shoes to go with the new braces, so I will go to the foot doctor in the next couple of weeks. I don't know the results of the overnight sleep test yet, so I don't know if my bi-pap settings will be changed. There is some talk of taking away the bi-pap altogether and switching me to the LTV Ventilator, which is stronger. As I understand it, the bi-pap shoots air in and lets my diaphragm breathe out. But when the diaphragm gets too weak, the ventilator is brought in, because the ventilator not onnly blows air in, but also takes it out, so it actually does the breathing for me. But this is still "non-invasive" intervention. Some patients choose to have a tracheostomy and invasive ventilator, which is a whole other story and a whole different level of care, which means nursing home, or a lot of money [about $100,000 per year] to come home on the trache and vent, which most people cannot afford, and don't even consider an option.

Next week will be six years since my diagnosis. As most of you know, my symptoms started way before then, some of whih I can even trace back a decade or more before diagnosis.

Off-topic: The situation in Haiti is devastating. I am proud of our American troops and volunteer doctors and other medical personnel who have one over there to help. And I must give a shout-out to the Israeli medical personnel who were first on the scene with a fully-equipped temporary hospital, and first to do some rather complex surgeries. In Israel, everybody has to serve in the armed forces, men and women. They go into the service at 18 and attend University after their service. So by the time they get to higher education, they are older than their American counterparts and really know what they want. I have posted a picture of me between two Israeli soldiers [who were so good-looking!] during my trip to Israel in 1987. Enjoy! I wish I still looked like that [sigh]..
Posted by Fern Ellen Cohen at 8:39 PM

I get that fiure from a couple of members of my support group, one of whom says it costs her $140,000 because she has to pay for nursing care and home health care on her own and figure 24/7 for 365 days a year...my aides get $12 an hour thru the agency, and privately, I would have to pay them more. Most of us don't have families to take care of us and in NY State, medicaid does not pay nursing care to come home on a trache....most patients in this state have to live in nursing homes on traches......why? do you spend less? do share with us, but please include 24/7 care paid out-of-pocket, because that is what most of us are facing.

Non-invasive ventilation is probably best but not everyone can use it. Go with what your body needs and you can still get home care; yes, it will likely mean you'll have to fight for it, but what else is new? One way it can be done with a consumer-directed personal attendant program like Concepts of Independence. Let me know if you'd like more information.

You should check out a consumer-directed personal assistant program like Concepts of Independence in New York City; the city modified the Nurse Practice Act to allow higher level skilled care (that would normally have to be done by a nurse) to be provided by home health aides working for that program as long as it was at your discretion & you take the responsibility. Lots of New Yorkers have avoided a nursing home that way; it can be a hassle, but it's worth it to live free.

I am already in the Concepts program, but I didn't know about this new Nurse Practice Act. This is a good thing, because I understand that trache care is not as difficult as it sounds and I know a lot of patients on trache/vent who have taught their young kids how to do trache care and suctioning and they are able to live at home without expensive nursing care. Thank you for this information. I plan to read more about it and even do a blog post about it.